Special guest at the College’s bi-weekly Formal Dinner on Monday 7th May was 2018 South Australian of the Year and former Aquinian, Professor David David AC. When introducing Professor David at the dinner, the Rector described him as one of Aquinas’s most distinguished and exceptional alumni.  “Few Aquinians, few South Australians, indeed few people anywhere have made as much impact for good on the lives of others as has David David,” said Brother Michael as he presented an overview of the remarkable life’s work of the world-leading craniofacial surgeon, and the values that defined him.  In his address to the students, Professor David urged the students to develop the vision, imagination and commitment to pursue careers and lives that were more than the ordinary, and made a difference in the world. Professor David was accompanied by his wife, Bronwen. Before and after the dinner, they met informally with students and staff.

In early May this year, Patrick Hynes made the journey from California to visit Aquinas College, and although the US has been his home for the past 50 years, the memories of his time at college have left an indelible mark.  Patrick resided at Aquinas for two years, 1962-63 and the group photo from 1962 is proudly displayed on his bookcase at his Newport Beach home.  It was extraordinary to chat and listen to Patrick’s recollections, look at photos and to read priceless Aquinian memorabilia he had bought along to share over morning tea with Dean of College, Mrs Carolyn Mee. (pictured right with Patrick on the balcony of Montifiore House)

Patrick even had a letter of reference from Father Buxton, penned when he left to go to Vancouver in 1967 and he could recall the following, “My “Valete Dinner” introduction was given by Tom Newlyn, who I believe is a professor in Sydney. It was an illustrious group that year…. many of them became doctors and lawyers, with a lot of Colombo Plan students from Singapore and Malaya becoming engineers and scientists”

Patrick’s own working career has been a juxtaposition of many varied roles, including 2 years as a cadet journalist for the ABC radio and TV news department which included meeting and interviewing the Beatles on their famous 1964 Adelaide visit. When he first went overseas to Canada he was an Amway door to door salesman, followed by the role of Films Officer, Australian Consulate-General, San Francisco before undertaking a Master of Arts (Broadcast Communications) at the University of Oregon. TV station and radio host work, with bar tending, managing restaurants and working in the hospitality industry, including Director of Public Relations with the Hilton Hotel, Anaheim. In this role he met film stars, sports and even a US President. It was fun to turn the pages of his photo album and recognize the parade of famous people Patrick was pictured with.

A tour of the campus followed with Patrick suitably impressed with the improvements and new building and was delighted he even found his old room!

December 2016 – An extraordinary and accomplished Alumnus

On a visit to Adelaide, Angelene Chan (1983-86 resident) contacted the college as she was keen to share the memories of her time at Aquinas with her family.  As an architectural student,  fellow Aquinian and Student President, Andrew Serwan could remember Angelene always intently studying and building models in her room.  Although quietly spoken, Angelene is the CEO of DP Architects, one of Singapore’s largest architecture firm, with 15 global offices and 8 subsidiary specialist firms. Accomplished in design and delivery, Angelene has completed numerous award-winning projects, including The Dubai Mall, Wisma Atria, and Sunray Headquarters which won the President’s Design Award, Singapore’s highest design accolade, and the SIA Architectural Design Award in 2014.

Angelene’s key works have been exhibited locally and internationally, and she has been invited to speak and judge at many international architectural events, including World Architecture Festival and Archifest. Seen as an active role model, she is often asked to share her experience as a female architect at local educational institutions. In 2010, she was named one of Singapore’s 20 leading architects under age 45 by the Urban Redevelopment Authority and was recognised as a ‘Woman Who Makes a Difference’ at the second RBS Coutts and Financial Times Women in Asia Awards for shaping boardroom decisions and inspiring communities. She was also profiled in Conversation With: The Powerful Women series, a signature interview programme

As CEO, her vision for the firm is design-driven. She is devoted to building a strong design culture and pushing design excellence throughout DP’s global offices. Leading the firm to its 50th year in 2017 and beyond, Angelene plans to further expand the Singapore and DP brand globally with new offices in Istanbul and Doha. Under her leadership, lighting and façade design specialist firms were formed to strengthen DP’s integrated design services.

Angelene is indeed a remarkable and inspiring woman and we were delighted to offer a tour of the campus and listen to her recollections.

On the 7th November 2016 Aquinas was honoured to receive a group of Alumni who had especially planned to visit the College to celebrate 50 years since they had arrived in Australia to reside at Aquinas whilst studying engineering. 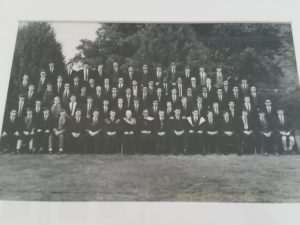 “Fifty years ago, we arrived in Adelaide in 1966 and started our student “life” in Aquinas as engineering students in Adelaide University. For most of the Asian students at that time, it was a first time away from home. There was quite a large population of Asian students staying in Aquinas College which was a “boys” college. We had students from Malaysia, Singapore and Hong Kong with most studying Engineering, Medicine and Dentistry.  The Rector was Fr Buxton, the Dean was Fr Maher and we have good memory of them during our time in the college. The two black dogs were the notable “residents”.  Fifty years on and visiting our old “home”, we saw significant changes. Firstly, the college is now “mixed”, secondly, it has grown and thirdly, the facilities have been modernized. While changes are inevitable, we still could recall “how it was” during our time! We definitely missed the old dining hall, the fish pond, the TV room at the basement, the chapel……

It was a memorable visit for us and we enjoyed the hospitality and the guided tour extended to us.”