Aquinas College has a proud history providing an enriched living and learning environment to help resident students achieve academic success and personal growth while they study at university. Since establishment in 1950 the College has helped over three thousand five hundred alumni to gain their under-graduate and post-graduate degree qualifications and move-on to achieve success in their chosen professions.

Some Aquinas Alumni become leaders in their chosen field of expertise in local, national and international arenas. This page is dedicated to Alumni that have achieved considerable success and made significant and recognised contribution to their profession during their careers and have been awarded the Aquinas Medal as recognition of their Distinguished Alumni status.

Professor David was the President of Aquinas College in 1963 and since then his medical achievements as a surgeon and as an educator, both in Australia and overseas have been extraordinary.

After his time at Aquinas College and the University of Adelaide, David undertook specialist surgical training in the United Kingdom where he learnt his amazing skills in general surgery and plastic surgery and has since been recognised as one of the leading cranial-facial surgeons in the world.

David established the world’s first Master’s Degree in Advanced Surgery for Craniofacial surgeons, in conjunction with Macquarie University in Sydney. A Fellow of the Royal Colleges of Surgery in Edinburgh, England, Australasia and Thailand, he has been the head of the Australian Craniofacial Unit since 1975 and Professor of Craniofacial Surgery at the University of Adelaide since 2003.

David has received numerous national and international Awards and was made a Companion of the Order of Australia in 1988. He has authored five books and has written over two hundred papers for local and international journal publications.  He has supervised Doctoral candidates and has given conference presentations in thirty countries throughout Europe, America, Latin America and Asia. He was also named South Australian of the Year in 1990 and Achiever of the Year in 1992.  More recently, David was named 2018 South Australian of the Year.

In 1995, Elle then won a Rhodes Scholarship to Oxford University where she completed a Doctorate in English Literature and a Master of Studies in Research Methods in English, at Distinction level. At Oxford, Elle combined her science and literature degrees in exciting ways, focussing her research on the language of popular physics writing.

An academic career has followed and after her time in England, Elle found employment in the English programme at the University of Tasmania, where she is now an Associate Professor.  After coming to Tasmania, Elle developed a keen interest in the Antarctic, where she travelled as an Australian Antarctic Arts Fellow in early 2004.  She currently holds an Australian Research Council Future Fellowship split between the University of Tasmania’s School of Humanities and Institute for Marine and Antarctic Studies.  Her main goal is to increase the knowledge and awareness of the Antarctic region within the humanities, and to build bridges with the scientific community.  She often collaborates with academics in other fields, from musicology to marine biology.  She is the co-chair of the Humanities and Social Science Expert Group within the international Scientific Committee on Antarctic Research and Arts Editor of The Polar Journal.

Elle is a keynote speaker at academic conferences, has co-edited two collections of essays and written three books.  She lectures in both the English and Antarctic Studies program at her university, and regularly supervises and examines Honours, Masters and Doctoral thesis projects.

Aside from the joy and satisfaction that Elle finds in her academic pursuits, through her work with students, her writing and research, her greatest treasure is her family life in Tasmania.  Elle is married to former Aquinas President, Dr Damian Murphy and together they have two children.

The Honourable Kevin Duggan graduated from the University of Adelaide in 1963 and a year later was admitted to the bar.  He was then appointed as an associate to the High Court of Australia where he served for two years in 1965 and 1966.

Soon after, as a relatively young lawyer, Kevin was appointed the Chief Crown Prosecutor for South Australia from 1971 to 1979 and in 1979 became Queen’s Counsel. He went into private practice as a barrister from 1980 to 1988, and during that time became President of the SA Bar Association and Vice-President of the Australian Bar Association from 1986 to 1988.

Kevin maintained his interest in academia by lecturing in Criminal Procedure at the Law School in the University of Adelaide from 1971 to 1986.  During that time he was also a member of the Aquinas College Council.

In addition to his role as a Judge, Kevin was the Judge Advocate General for the Australian Defence Force from 1996 to 2001 and was a Major General in the Army Reserve. Upon his retirement from the Army he was appointed a member of the Defence Force Discipline Appeal Tribunal and is the Colonel Commandant of the Australian Army Legal Corps.

In June 2002, Kevin was made a member of the Order of Australia in the military division of the Queen’s Birthday Honours List.  He has served as the Governor’s Deputy and Acting Chief Justice and for something completely different was technical adviser for the film “Breaker Morant”.

The Honourable Justice Duggan AM, QC RFD retired in July 2011, after 23 years on the Supreme Court bench and 46 years in the legal profession.  Since retirement Kevin has acted as a consultant to the Federal Court, is an Adjunct Professor of Law at Flinders University and the Inspector of the Independent Commission against Corruption in South Australia. 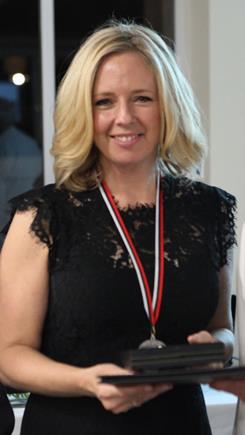 Helen McCabe began her association with Aquinas College in 1986.  Since graduating with a Bachelor of Arts in Journalism Helen has had an extraordinary career in media, including television, newspapers and radio.  She has built a high profile across a number of platforms with regular television and radio appearances and has interviewed many distinguished Australians, including several Prime Ministers and famous media personalities.

Most journalists write for papers or magazines, then if they have the opportunity and talent, move into radio and television reporting.  But Helen did it the other way around.  Her first job was on radio 5KA and then with a television channel in Whyalla.

Commencing in 1989, Helen moved onto a bigger stage when she worked as a journalist for the Seven Network in Adelaide for three years before becoming a political journalist in Canberra with a special focus on indigenous affairs.

In 1996 Helen returned to radio for a time as a producer for the ABC in Canberra for two years, thus making a total of seven years as a member of the Canberra Press Gallery.  Helen then transferred to print media and to News Limited in Canberra and later, from 1999, reported from London for three years where she was the European Correspondent.

For the following eight years Helen continued with News Limited in an editorial role and was the night editor for The Australian for four years before she became the Deputy Editor of the Sunday Telegraph in 2006.

Since 2009 Helen has been the editor-in-chief of The Australian Women’s Weekly where she has made a huge impact, winning the Magazine of the Year in her first year of editorship and numerous other industry awards.  More than half a million copies of this magazine are sold every month throughout Australia, New Zealand, London and Singapore and as a consequence, Helen is very much a house-hold name in this part of the world.

Helen supplements a busy work schedule with her membership of the Boards of Adopt Change and the Australian Indigenous Fund, and through The Australian Women’s Weekly Helen actively promotes fundraising events for research into Ovarian Cancer and also campaigns against domestic violence.