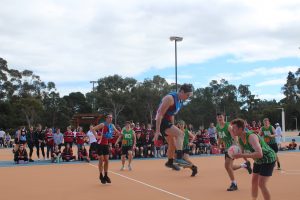 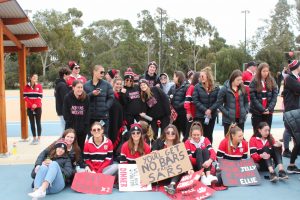 Both the women’s and men’s College netball teams qualified for the 2020 Finals, the women going into the decider on 13 August with a 4-Nil record after the rounds, and the men with a 3-1 win ratio.

Both teams fired magnificently on the night, running up convincing wins, and giving Aquinas a prized HTC double-victory.  The women finished with a 10-goal lead over Flinders Hall, and the men with a whopping 15-goal margin over St Ann’s.

Sports Co-Secretary, Madi Turner, who played in the women’s team and helped to coach the men, was delighted with the results.

‘Our teams were sharp, fast and smart in each game,’ said Madi. ‘Both the girls and boys had trained and planned well, and they displayed great class on the night.’

For the Aquinas men, it was the fifteenth year in a row that the premiership cup was to return to its place in the College trophy cabinet, and for the women the fifth straight year.

Supporters were on the sidelines at the Goodwood Road courts in huge numbers and loud voice. Almost the entire College was there at the end, decked out in the Aquinas red, back and white, to form the traditional circle of linked arms and join in a rousing rendition of ‘Glory, Glory to Aquinas’.

Back to Blog Page